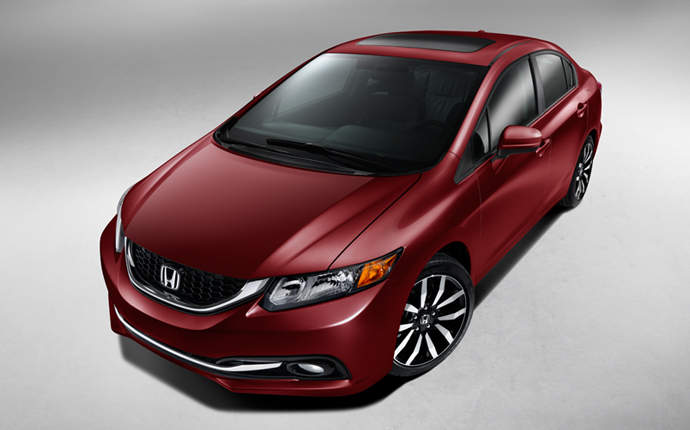 The great thing about a Civic is that it’s a regular person’s car. It’s for people with too many things to do, who didn’t get enough sleep, and have to grab something to eat on the way. They can be either messy or neat, social or an individualist, the life of the party or the quiet type who hangs back. Some of them will be energetic and full of ideas, and others will prefer tranquility and quiet reflection. The Civic is about being a platform for people—that is, it necessarily supports and takes its place off-stage—and after driving one around on a recent Friday afternoon, we’re so glad that that’s the way it handles itself.

We went to Leith Honda on Capital Boulevard in Raleigh, North Carolina to see the dealership and meet with a sales representative for our test drive. If you haven’t been there, the dealership is about 11 acres, and has about 500 cars available on-site at any given time. It’s a large, modern facility filled with people and energy, and there’s one of every type of Honda inside so that you don’t have to walk the lot just to learn the basics of each model.

The super high ceilings gave the place an open-air feel so that whether you are watching TV in the lounge area, going online at the service waiting section, discussing service options with customer service members, or talking over different models at desks with sales consultants, you always felt that you could wander over to check out one of the other areas with ease. The service area, if you strayed far enough to see inside, is even more cavernous with clean white floors, even higher ceilings for ventilation purposes, and rows upon rows of service bays for vehicles.

But back to the showroom. We were greeted by a sales consultant outside the main doors (in the cold!) who took us to the representative we’d arranged beforehand to meet. He walked us over to the showroom Civic model, freshly parked because the previous model had been bought the night before, and walked us through the car’s more salient features. Our sales consultant opened doors, pulled levers, and pushed buttons, which made us feel comfortable to do the same. 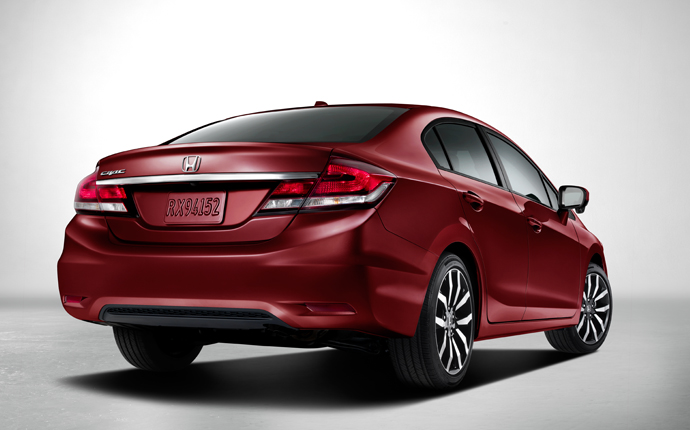 One of the more interesting external features of our 2014 EX model—a four-door sedan—was opening the door. It was a regular door handle, and the car was locked. But because the key was in the sales consultant’s pocket, the car sensed that it was okay for the door to open. We placed our hand on the driver’s door handle, and voila: the car unlocked. A small feature, sure, but a touch of modernity that should exist in every car in 2014.

Walking around the car, we noticed the tiny rear camera on the trunk, a standard feature on all Civics that shows what you’re backing into. Our test vehicle had tiny cameras on the side mirrors which offered a huge increase in side visibility. These camera feeds are displayed on the standard dashboard display when you shift into reverse or engage a turn signal.

Structural integrity is a crucial aspect of safety because the Civic is a small car, and the sales consultant detailed how Civics, if flipped over, can sustain up to two and a half times their weight before collapsing under the strain. It made us feel safe to know the roof of our Civic had that amount of load-bearing strength. Similarly, we saw the structural supports under the hood that protected the engine, and thereby protect occupants from intrusions into the passenger compartment. These are the more mundane aspects of a car—they don’t make it speedy or exhilarating—but they’re critical to have when you need them.

From there it was time to get into the car itself, and our sales consultant was happy to put us in the driver’s seat so he could ride shotgun. The driver’s controls are easily the coolest part about the Civic because everything is centered around you. The center console is angled toward you, the dashboard has two rows of screens, and the materials themselves were refreshingly up-scale. 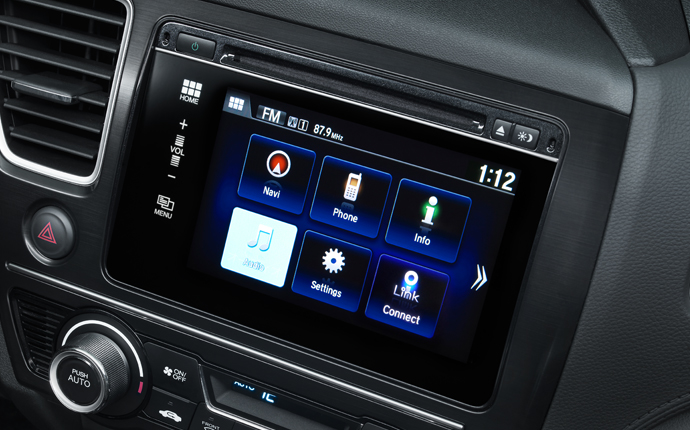 First things first: the touchscreen display. We gave it away earlier when we mentioned that a rearview camera was standard. Civic EX’s (like ours) and above have a 7-inch screen that offers intuitive touch controls. The car was smart enough to know that we had a smartphone in our pocket, and with a few touches we connected it to the car’s audio and were listening to our music. It also connected with our address book, so had we had a burning desire to call our mother, we would have been able to do so instantly.

But what if one of our friends in the back seat had a song on their phone that they wanted us to hear, or had the number to the guy at the place with the thing, and we wanted to connect their phone to the audio system? No problem. Our sales consultant had the car search for nearby phones, and our friend’s device popped right up. No silent moments of a screen “Searching…searching…trying to acquire signal…” It was there, and it worked. Simple.

Back to the driver: the dashboard actually has two rows of information to see—a lower level with the traditional instruments we were used to, and an upper level with a digital readout of the speed, fuel capacity, fuel economy rating, and a small screen on the right. This small screen was particularly cool-looking—it was recessed into the dashboard which gave it a very space-age feel in its own little compartment of darkness (we like).

What the screen displayed, incidentally, was also pretty nifty. You could toggle via controls on the steering wheel between music information, engine stats, and even a bank of your personal photos, a feature we found touching. How nice would it be to have photos of your friends or family available on your dash while driving?

At this point we felt we’d absorbed about as much information about the car as we possibly could without actually have driven it, so we put our foot on the brake and pressed the start button. Because the key was in our pocket, the car started right up, and we were off.

The Civic automatically runs in Eco mode, a fuel-optimizing measure that stretches every drop of gasoline as far as it will go, and encourages you to drive thoughtfully. The way it encourages is via a pair of glowing indicators next to your speed on the upper display. Driving with gradual acceleration and restrained use of the throttle will make the bars first turn green, then deepen slowly into an optimal green. Drive like a 9-year-old in a go-kart and the bars will definitely not be colored green. 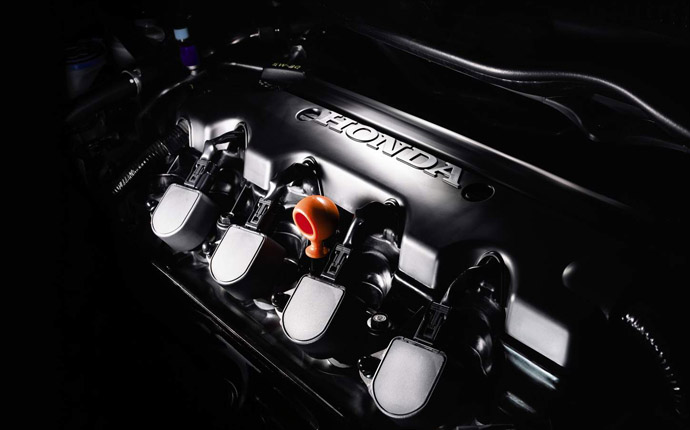 All of that is designed to nudge you into getting the optimal fuel economy the Civic is capable of, and—let’s be honest—probably a chief reason you’re looking into this car. Should you grow tired of living on the straight and narrow, just press the attractively-round Eco button to the left of the steering wheel to turn it off, and you’ll be free to get the most out of the 143-horsepower 1.8-liter engine. The car’s transmission doesn’t have a set number of speeds (e.g. 4-speed, 5-speed) because Honda’s continuously-variable transmission means—in a very zen way—that the transmission is always where it needs to be, without a fixed number of speeds.

Handling is responsive, with little lean in the corners. Steering was direct and communicative, and we felt confident taking winding roads at speed. By the time we pulled back into the dealership, we felt satisfied that the economical sedan could move when it needed to, handle more spirited driving, and would provide environmentally performance for when you just need to get where you’re going without making it into a Jason Bourne experience. 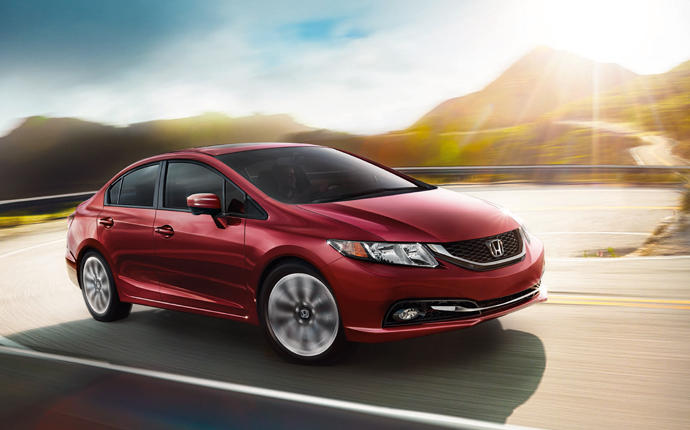 The Honda Civic embodies the emphasis of quality materials, design and mechanics that people know they can expect from any Honda vehicle. From the leather-grain texture of the dashboard, to the outstanding mechanical reliability of the engine and advanced technology for smartphone, Bluetooth and iOS connections, Honda has clearly thought through what’s most relevant to drivers today and made sure that Civic has a simple answer for everything. We were quite pleased with our test drive experience, and would have been quite happy driving off the lot with ours a keeper. Maybe next time we will.

We Took a 2014 Honda Civic For a Test Drive, and It Was Fantastic was last modified: December 30th, 2014 by Leith Honda

Leith Honda Reviews from DealerRater
A Hybrid to Remember: The 2014 Honda Accord Hybrid Review