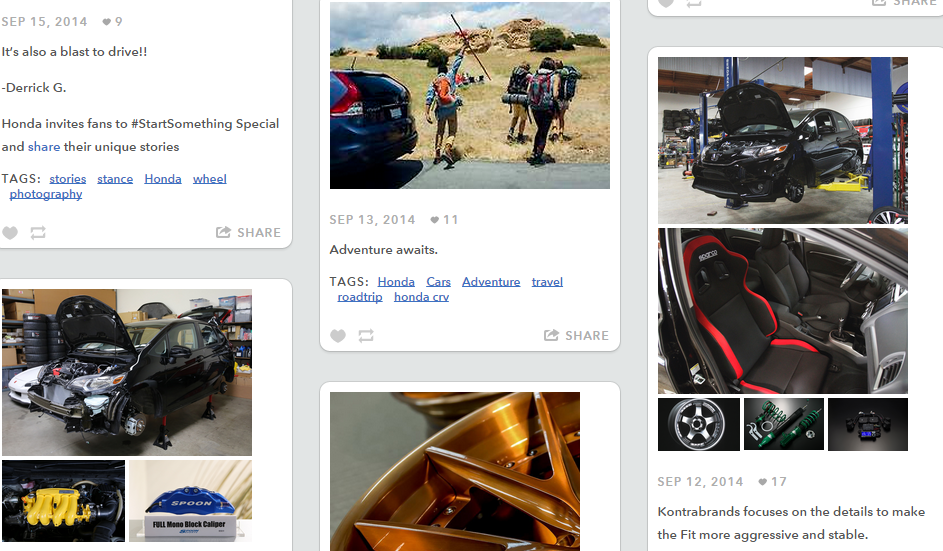 Those of you who are into personalizing or even modifying your car to make it your own might appreciate a new contest from Honda. Six teams—Bisimoto Engineering, Kontrabrands, MAD Industries, Spoon Sports USA, Tjin Edition and Kenny Vinces—will each customize a 2015 Honda Fit in a Fall contest—no Pumpkin Spice allowed.

Instead, all images, GIFs and video of their progress will uploaded to Honda’s Tumblr page, hondaloves.tumblr.com, with the hashtag #ProjectFit. The teams will come up with unique visions for their Fits that include aerodynamic kits, special wheels, paint jobs and any other ways to manifest their expression.

Here’s where your help comes in: the teams will work from August 21 through October 22; every time a team uploads something to Tumblr about their Fit, you can vote on it by liking and reblogging that post. So long as it has the hashtag #ProjectFit, it’s fair game. At the end of the two months, judges will tabulate all of those likes and reblogs. Whichever team has the most will win a special prize from Honda.

All six specially constructed Fits will be revealed at the 2014 SEMA Show in Las Vegas this November. The SEMA show is a convention all about automotive specialty products; last year the show drew about 60,000 attendees.

We’re beginning to see some of these new 2015 Honda Fits around Raleigh these days, and sometimes we get lost in daydreams about what they could be. Perhaps one could be Hello Kitty-themed, which was recently revealed to be a girl, not a cat. You could create an Anakin Skywalker-themed one based on the Star Wars prequels, but then everyone would be trying to crash into you.

Whatever you would decide, the Fit is going to be a big deal for Honda in the future, so it’s worthwhile thinking of it in more terms than black, white or silver. What would you want your Fit to be about? What could it say? The contest has already started so bookmark Honda’s Tumblr and explore the #ProjectFit hashtag every once in a while. Voting is American!

Honda Asks You To Decide Which Fit Is Best In Contest was last modified: December 30th, 2014 by Leith Honda