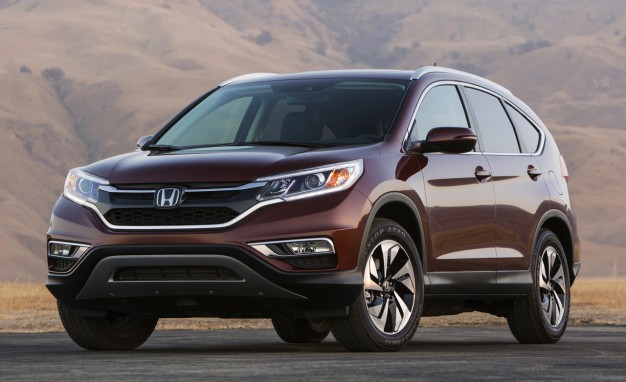 Honda has released the first official picture of the 2015 CR-V, and it looks good. Really, it does. This is the first redesign of the CR-V in three long years, which means a substantial change in appearance is due. If you liked the 2015 Fit, you’ll like the new CR-V. There is a strong resemblance between the two in the front grille, and the new CR-V has the razored, angular look to its headlamps that’s en vogue in the auto industry these days.

Headlamps used to have a bulbous, squared look in the 2000s, but a new decade means a new look. Now rectangles are the thing, the sleeker the better. The new front end of the 2015 CR-V looks wider and squatter than the outgoing model, which could contribute to better handling. The fog lamps, once tiny circular lighthouses skirting the asphalt, are now self-contained empires lancing out Terminator-esque beams from reflective rectangular bases. Or that’s how we imagine them, at least.

This is a bit of editorializing, but we think the new CR-V has a more truck-like feel to it. SUVs have always shared a truck platform, but the outer form leaned to the “sports” part of the name. This new CR-V seems like a sway toward the “utility” part. This might be owing to the new crossover SUV on the way from Honda, the HR-V. We’re willing to bet 1,000 Republic credits that it’s taking over the sporty mantle.

But the big question we have no answer to is what Honda’s doing with the rear of the new CR-V. The rear is a devilishly hard section of an SUV to resolve (see: the 2015 Jeep Cherokee; ouch). In recent years Honda traded the slanted bent of its earlier models for a box-like design that improved rear visibility. It’s certainly not the philosophy of other SUV makers like Porsche, but Honda has different goals.

That said, this is the first redesign in three years, so we’re curious to find out what Honda did in this area. More pictures are incoming on September 30. So, if you’re looking for a Honda for Sale in Raleigh, come check out Leith Honda.

Baby Got Back: Your Guide to the Best Orthopedic Lumbar Support for Cars
Awesome Party for Customer Appreciation This Saturday