It’s that time of the week again! Zero to 60 with automotive journalist Mark Arsen returns in the all-new 2017 Honda Accord Hybrid, courtesy of Leith Honda in Raleigh. If you’re looking for a car that gets nearly 50mpg and is incredibly safe, you’ve definitely found it. The 2017 Accord Hybrid starts at $29,605, gets 47mpg in the city, and looks great doing it – inside and out.

More on the engine?

So how far will that take you on one tank of gas? As you’ll hear above, pretty darn far. We’re estimating over 600 miles. Plus, it’s no slow-poke. The 2017 Accord Hybrid’s electric motor puts more than enough torque down to slip through that small gap across a crowded street. It accelerates from 0-60 in 6.9 seconds, which is half a second faster than the base Honda Accord, and 3.6 seconds faster than a Toyota Prius.

In short, the 2017 Honda Accord Hybrid is the mid-sized sedan for someone who’s conscious of how much fuel they’re consuming, but doesn’t care if other people know it. It’s a good-looking sedan with more to it than meets the eye. Some people will like that, and other won’t. All we know is, Honda’s done it again. 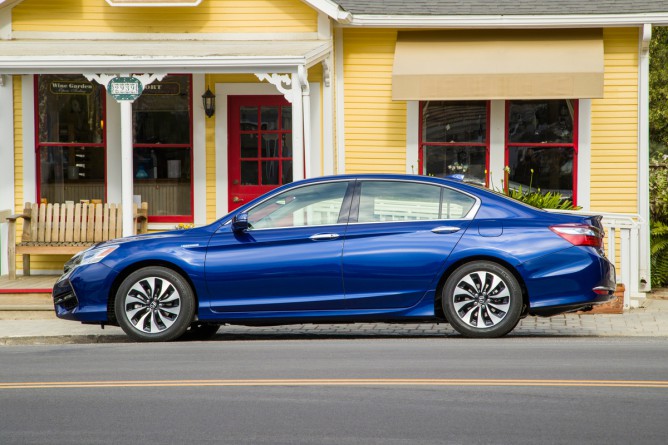